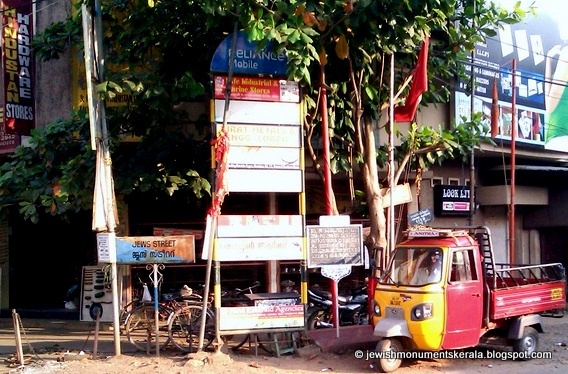 The monotheistic religions: Judaism, Christianity and Islam arrived India much before they reached the West. For instance, it is widely believed that Christianity reached the subcontinent only after Portuguese, the first European colonists arrived India in the 15th century. However, long before Christianity reached many parts of Europe, it came to India. According to strong, continuous and unanimous traditions among the ancient Syrian Christians of Kerala, Christianity was introduced to India by St: Thomas, the Apostle of Jesus Christ in 52 AD, who established seven churches in Kerala. Contrary to popular belief that Islam came to India through the 11th century Muslim invasions in the northern parts of the country, it first arrived Kerala via the Arab merchants from 7th century onwards at the earliest. Similarly, Judaism the oldest continuously practiced monotheistic religion has an Indian presence from very early times. If traditional accounts are to be accepted,India had a Jewish colony from the time of King Solomon (10th century BC)! Most importantly, all the three religions trace their arrival in India to the Malabar region of Southern India which is currently the modern State of Kerala. Since ancient times Kerala has been the center of the Indian spice trade where Greeks, Romans, Jews, Arabs and Chinese came for grabbing their part of share. To be specific, the first Jewish, Christian and Islamic settlements of India claim their origin to a place called Cranganore (modern Kodungallur) in Kerala.

Much has been written on Indian Jews, their unique culture and traditions. Among the three major Jewish communities in India, the “Kerala Jews” popularly known as“Cochin Jews” are the most ancient followed by the “Bene Israel” of Maharashtra and the “Baghdadi Jews” of West Bengal. Recently two more communities have claimed Jewish ancestry viz. “Bene Menasheh” (1970s) from North East India and “Bene Ephraim or Telugu Jews” (1980s) from Andhra Pradesh. A small population of Jews had migrated to India during the Mughal, Portuguese, Dutch, French and British rule as well. Perhaps the Jewish refugees from Hitler’s Anti-Semitic Europe were the last Jews to arrive India. In other words, Jews weren’t a single emigration to India. At different times they arrived and settled peacefully in India where they never experienced any anti-Semitism from the native Indian community. Although Jews supposedly reached Kerala as early as 1st century AD, there were many different waves of emigrations later as well. Gradually, Jews of Kerala became organized into three distinct groups, but the different communities interacted very less among themselves. 1) Malabari Jews: the largest and most ancient group considered to have arrived in India as merchants during the period of King Solomon (1000 BC). 2). ‘Paradesi’ (foreigner) Jews: the second largest and recent group (from 16th century onwards) who migrated mainly from Egypt, Iraq, Syria, Iran, Spain and Germany. 3). ‘Meshuhararim’ (released): the smallest group believed to be the slaves held by both Malabari and Paradesi communities who were converted to Judaism and later on released from their status as slaves. The Malabari Jews were called the ‘Black Jews’, the Meshuhararim-the ‘Brown Jews’ and the ‘Paradesi’-the ‘White Jews’-terms considered derogatory and racist today. The arguments on who came first and who are more pure were often fought vehemently and each sect defended their claims. The Jewish population of Kerala numbered 2,400 at the height of their “mass” emigration to Israel in 1954. Today (2011), less than 40 Jews remain in Kerala-9 Paradesi Jews comprising of 6 women and 3 men; and less than 30 Malabari Jews.

In a strong caste-based Indian society, fair skinned Paradesi Jews managed to win a privileged position although they were a minority and newly arrived. Their European background, influence and wealth managed to push the majority of relatively poor Malabar Jews into an inferior position in colonial India. Unfortunately, even today for many in the west and to a great extent in India too, the existence of Kerala’s ancient Malabari Jewish community and their heritage is far unknown. The famous Paradesi Synagogue in Cochin is perhaps the only monument that comes into the mind of many as far as Judaism in Kerala is concerned. Often mistakenly acclaimed to be the oldest (built 1568) synagogue in British Commonwealth, the Paradesi Synagogue however, is the only functional one in Kerala today (2011). Did the Jewish community of Kerala leave anything more than this famed synagogue? The answer is a big yes. Judaism in Kerala is not only about the Paradesi Jews of Cochin and their synagogue in Mattanchery. In fact, the Malabari Jews have seven synagogues and six cemeteries, and several aretfacts and monuments that are also part of Kerala’s rich Jewish heritage! This does not include the few existing Jewish homes and the many earlier Jewish residences converted into non-Jewish owned business buildings and private villas.

This blog will be an attempt to help people both inside and outside India to locate and learn about the known Jewish monuments of Kerala, that include synagogues, cemeteries and former Jewish residences. It will be equally pictorial and textual in format. One of the objectives of this blog is to help people in identifying all known Jewish monuments of Kerala through maps and photographs. Their left out synagogues and cemeteries are the physical landmarks that still stand in testimony to the vibrant and glorious heritage of Jews who claim at least 2000 years of strong and continuous bond with India. The big question is about the accessibility and identification of these monuments. Some of the cemeteries for example are so overgrown with weeds and turned into garbage dumping yards that even the locals have no clue about their existence. Most of the sites have no sign boards or maps available to pin point their exact location. The information from internet and other sources are also limited or at times misinformed when locating the monuments are concerned. I will try to get as many photographs as needed to help people understand these monuments and the blog will not be confined to the heritage of Paradesi Jews alone. For those synagogues that are disputed properties or lie in ruined state and are not accessible for the public I will only add photographs of the exterior. Some of the original Jewish artifacts from Kerala are preserved in Israel and what left here are the duplicates. In such cases, I will trace and append online links having the original photographs. Regarding the dates associated with the history of ‘Kerala Jews’, I have tried to incorporate the most popular views and need not always be the scholarly accepted ones. I shall be much glad if any one can contribute or provide details of additional monuments, sites or artifacts you think can be classified as part of Jewish heritage of Kerala.

Being also a photoblog, I will be concentrating more on the photographs taken from various Jewish monuments in Kerala. Not many sites are available online that go deep into the structural and historic details of these heritage units with photographs. However, we are lucky to have a few very enlightening resources. The“Friends of Kerala Synagogues 2011”(Prof. Jay A. Waronker, USA; Prof. Shalva Weil, Israel; Marian Scheuer Sofaer, USA; Isaac Sam, India and Tirza Muttath Lavi, Israel) maintain an excellent site on the synagogues of Kerala. I strongly recommend anyone interested in ‘Jewish synagogues of Kerala’ to go through their highly informative links. Whenever, I refer to their site, it will be acknowledged as ‘www.cochinsyn.com’. The other very important site I recommend is the beautiful photo collection by Jono David in his ‘Ha Chayim Ha Yehudim Jewish Photo Library’. He has photographs from many Jewish monuments of India. Although he has got wrong one of the synagogues (Mattancherry Kadavumbagam Synagogue) the site has largely helped me to identify the Jewish cemeteries in Kerala.Thoufeek Zakriya who introduces himself as a young Indian Muslim, hospitality management student and a calligraphy artist maintains a well informed and interesting blog discussing the History of Jews of Kerala.

The most important Jewish heritage structures in Kerala are the synagogues (Juda Palli in Malayalam), cemeteries and residences.

Today, there are 35 synagogues in India and 7 of them are in Kerala. The architectural style of Kerala synagogues differs from those in the west. These synagogues are strongly influenced from earlier Hindu religious buildings on its design and construction. They are characterized by high slope roofs, thick laterite-stoned walls, large windows and doors, balcony and wood-carved ceilings. A Kerala synagogue consists of a ‘Gate House’ at the entrance that leads through a Breezeway to the Synagogue Complex. The synagogue complex is made of a fully enclosed Azara or Anteroom and a double-storeyed sanctuary-the main prayer hall. Inside a typical double-storeyed sanctuary of a ‘Kerala Synagogue’ are:

1) A Tebah/Bimah: Located at the center of the sanctuary, Tebah is usually an elevated wooden platform or pulpit from which Torah, the holy book of Jews is read. 2) A Heichal (Ark): Represents the altar. It is a chest or cupboard in the synagogue where the Torah scrolls are kept. It is usually carved intricately and painted/gilded with teak wood. Unlike in the European Synagogues, where the ark is placed on the eastern wall, the synagogues in Kerala have the arks on the western wall facing Jerusalem. 3) A Balcony/Second Tebah: It is unique to the synagogues of Kerala. The balcony has two portions one for men and the other for ladies. Women’s seating area is placed directly above the azara. 4) A Staircase: Leads to the balcony and is generally spiral in shape and made of wood. At times there are two staircases, one for men from the main hall inside the synagogue and the other for the ladies from a staircase room outside the synagogue; 5) A Jewish School: Is actually a classroom for Jewish children usually located behind the women’s section on the first floor.

Resting place of ancestors means a lot to the Jewish community. Sometimes they even carried tombstones from their old settlements while migrating to a newer place. The oldest Jewish tomb in India (dated 1269 AD) preserved in front of Chendamangalam synagogue is one such transferred from Kodungallur. Unlike Christian tombs in Kerala with Malayalam and English engravings, the Jewish graves have mostly Hebrew inscriptions. The Jewish year can be converted into modern Gregorian date if one can read the Hebrew letters. ‘Reading Hebrew Tombstones’ is an interesting site to read the Jewish tombs.

Today, most of the early Jewish homes sold to non-Jews are substantially modified or refurbished. However, there are a few features that still make them identifiable. Sometimes you can trace Jewish symbols like Menorah (candlestick) and Magen David (Star of David) on the walls, windows and roof tops. For example, a few residences in Mattancherry still maintain the Star of David (Magen David) despite being converted into shops or warehouses. The best way to locate the home of a residing Jew is to look for the Mezuzah on the door post. Nailed to the doorpost of a Jewish home, Mezuzah is a small container made of wood, plastic or metal having a piece of parchment with the most important words from the Jewish Holy Book, Torah. It is customary among religious Jews to touch the mezuzah on entering or leaving the home. A few homes in the Synagogue Lane of Mattancherry with mezuzah are the residences of the remaining 9 Paradesi Jews.

The Jewish monuments and artifacts I will be discussing in this blog are:

(The various speculated dates of establishment in parenthesis are taken from www.cochinsyn.com, coutesy Prof. Jay A. Waronker)

5. Jew Street, Chendamangalam (used to be a Jewish Market or Judakambolam)